Sorry for the radio silence, May truly was an amazing, exciting, and crazy month of experiences for the team. Warning, this post is long and awesome.

The bulk of this program took place throughout May, with Erin and Kendra coaching ladies through everything from flat changes, to pocket packing, to track standing, hill climbing and beyond. It was absolutely AMAZING to watch 15 strong women build up their confidence and skills over the course of five weeks. We wrapped up the course with a night of cornering and crit racing on May 31. Ladies flew around a closed parking lot for the better part of an hour, turning left and right, avoiding getting caught up in a pedal clip slide out (don’t worry, she’s totally fine, she brushed herself off and got right back on her bike!), and sprinting it out for first across the line on their final lap. It was truly beautiful, and we have it on video. We think it was a huge success, a few of our ladies even participated in their very first race, a time trail, this past weekend out in Airdrie. But don’t take out word for it, these women are happy to speak for themselves, watch for a special blog post from them.

Up next: Tour de Bloom

This was our debut race as a team and I can now officially say: I LOVE MY TEAM. I could not have asked for better women to travel for hours with and line up beside. Off the bike the mood was light and fun, on the bike we were all business. The lovely Kailee Boyle guest raced with us for this event, she and Erin kept the stage one road race interesting launching attacks when the pace would lull. This race got a bit weird, there was a traffic accident on one of the main roads and the race was stopped for about 5min then kept at a rolling neutral for the next 30k. That really only left a bit of flat before the 20k finishing climb up the Chumstick. The whole team remained with the peloton until about the last 1500m when Erin and Kailee following an attack up the final kicker and the group split the group in half. The final sprint placed Erin in 10 and Kailee in 13, Jess and Janelle were just behind.

The pace up the hill climb in stage two was blistering. Being the mountain goat that she is, Kailee’s hill climb on stage two landed her in 6th place GC with Erin close behind. Jess and Janelle solidified themselves solidly mid pack.

Next up was the twilight crit. Normally I’d say that crit races are good for a fast pack ride and don’t really do much for GC. That was not the case for this crit. There was a hill, that didn’t seem like much because it wasn’t too long, but it was steep and it did happen every lap which led to close to 200m of elevation by the end of the race. We were warned the race would start hot to trim the fat, and it did. Jess and Janelle were poorly positioned and did not make the crack in the group. They made a strong chase with some Redtruck riders but were not able to catch back on. Somewhere in the middle of the race Erin noticed Kailee was suddenly missing, she had dropped a chain and was off the back. With this not being a recognized mechanical, Kailee gave chase and was eventually pulled just before the finish. Erin remained in the race and finished solidly mid pack in what she will tell you was the hardest crit she’s ever been in, it was also one of the most fun.

Heading into Stage 4 Road Race the only goal was to keep Kailee in top 10. She was hanging on by a thread to 9th with Erin seconds off in 12th. The girls lined up planning to sit near the front and wait for the fireworks to come. They did. The peloton split on the first long climb, Kailee and Janelle ended up behind a few slower girls who couldn’t chase the attack, Erin dropped back for them, Jess remained with the lead group. The gap was about 15-20 second on a group moving around 40k/hr. With Kailee on her wheel Erin executed a perfect slingshot and got our girl (and unfortunately an Audi rider) back on the lead group. Erin herself did not make it, once the chase group formed with a few riders ahead of Kailee in GC, she stopped chasing, content the Kailee would maintain her position. Jess kept Kailee on the pack with strong lines through the group, short pulls, and a bit of a block for the final sprint.

All and all a great weekend of team work, challenges, and great experiences in the largest field any of our ladies have ever raced in (44 riders). 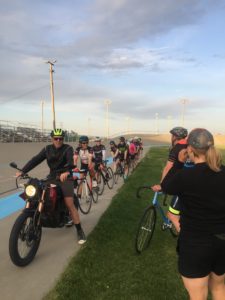 Started May 15th and will run from 7-9pm every Monday until the end of June. You may not know this but Erin and Kendra are both members of the Calgary Bicycle Track League (CBTL) executive board. They have been on a mission the last couple years to see more women on the track. This year they have taken on coaching Monday night sessions, with the support of Synergy President CP for motor pacing and awesomeness.

Taking place on May Long Weekend in Saskatoon this is one of the teams favourite races. The town really pulls together to put it on, the fields are usually large, the crit is wide and safe, and the TT is flat. Our ladies traveled with the gents for Synergy Racing, we learned that these guys are just about as ridiculous as we are when it comes to race adventures, but our music is decidedly better. All jokes aside, we had a ton of fun with them and are super excited for our next joint trip.

Unfortunately this year the numbers for BoB were drastically down. The women’s field 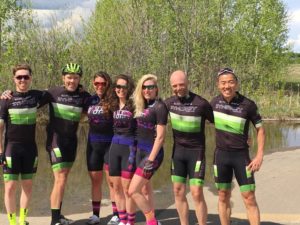 had 10 vs the normal 25ish. That didn’t stop our team (and Synergy) from CRUSHING the races. Our girls place 1, 2, 3 in all three events, shouts go out to Sask rider Haley for hanging with the pain train for the whole road race, we may have to start a Saskatoon chapter of Watt Riot for you. Also a huge shout out to Mark Baril of Synergy for his first place GC in cat 5 men!

Erin and Janelle headed up to this to play in the gravel and race in circles. A number of weird things happened in this race, ask us about it the next time we see you, we will tell you a long winded story. What’s important is that Erin learned she does not like long gravel/sand sections in the middle of a road race, and we reaffirmed that Janelle is stubborn and will not DNF even if she is out of water and wants to die. Also, our sock game was on point.