Everyone goes into a race with a different goal and experiences that race differently.
Here’s what our riders had to say about Tour de Bowness. 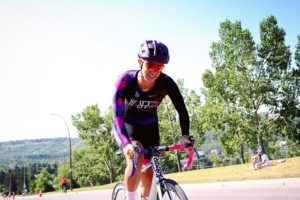 The past weekend was definitely one of the most challenging races of the season — the field was stacked with many tough and inspiring female athletes. Even though I finished near the bottom of the top 10, I’m so proud about this race! Despite the obvious intimidation factor of lining up next to professionals and Olympians, I was excited to see how far I could push myself this year. My main goal is to see year over year gains, and outdo what last year’s Janelle was capable of. I definitely think I succeeded at this — in the road race, I stuck with the group up the largest climb. This is something I have never been able to do on the TDB road race course, and reflects the hard work I’ve put into my climbing efficiency this season. On the hill climb, I beat my previous personal best time up Mackay by almost 20 seconds, a big difference on such a short distance. And in the crit, I was able to ride a much faster average speed on the same course as last year. Above all, I felt such support from my friends, teammates, fellow racers, and the community — it was awesome to race in front of so many spectators. Big thanks to Bob and all the other organizers/volunteers for making such a fun and well-planned event! 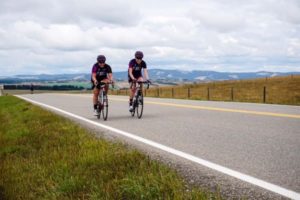 Tour de Bowness (TDB) was this past weekend and what a highlight of the Alberta road cycling scene. This race attracts ridiculous talent from across Alberta and out-of-town, features three amazing races (with a new hill climb location this year!) and has always been a huge supporter of women in cycling by offering equal purse for the top male and female categories. As a Bownesian living just down the street from Bow Cycle, I’m so proud of the way the Bowness community embraces the crit and how support and enthusiasm for the event grows every year. We have been hearing for months about the street festival and bike race and the only better way to spend a Monday besides watching the races, is to participate in them. Which I am lucky enough to say I did!

TDB was a win for me but not in the usual way. This past year has been a very difficult one personally. The sudden passing of my father last autumn followed by a difficult injury (full first metatarsal dislocation, two broken toe-bones and three completely torn ligaments) meant that life was thrown into chaos. After my non-weight-bearing period was over, I decided to train when I could, to the ability that I could, and continue to plan for a race season regardless of what the results would be. The consistency of a schedule, and the routine of workouts, recovery, and rehabilitation gave me structure to my life when I really needed it. The goalposts of long rides, gran fondos, and races gave me a sense of achievement and started putting my physical confidence back together. Working with my spectacular teammates from Watt Riot to run two programs this summer for women also let me help spark the enthusiasm for biking and competition in our participants and I absolutely treasured the programs. All this culminated in the TDB and knowing my (much less-than-hoped-for) physical status, I registered. There are so many great reasons to sign up for a bike race you know you’re not going to be successful in but the main reason is because I simply love this race. How could I not register and support a race that I love and that’s right in my neighbourhood?

So yes, the results on paper can definitely be improved, but that wasn’t why I raced. TDB was the culmination of working through this year one physio session and one workout at a time. Showing up to the start line is my victory. I’m hugely grateful to everyone that helped me get there! And the TDB is always a source of inspiration for me to train harder, better, and smarter for the next year and this year was no exception. I for one can’t wait for 2018

Tour de Bowness was all about racing without expectations and allowing myself space to do the best I was capable of in the moment rather than the best I felt I should have. This was mentally a hard lesson. I went into Tour de Bowness at (what I hope to be) the tail end of a long illness. Friday August 4th was the first day in six weeks I was able to stay awake for a full day. This was not the ideal way to enter into a race, especially this one.

Tour de Bowness is arguably the largest and most important race on the ABA calendar. It often draws large participation numbers (including pros from around Canada) and a large audience. 2017 was no exception. The women’s field was stacked. It was exciting. It was intimidating. Knowing I wasn’t on my game, I still felt showing up was important. This year Kendra and I have coached women’s cycling development programs on the road and on the track. Our messaging to the women in our programs has been to show up and try a race. It doesn’t matter if you win, finish mid pack, or finish dead last, what matters is how you feel about your performance and what you take away. I felt it would be hypocritical to continue to say this if I refuse to show up to a race just because I’m not on form. I also feel that politically (I know I said the p word), supporting Tour de Bowness is important. This race always has the largest field of Cat 1/2/3 women in Alberta, gives women their own race, and provides equal prize money to equal depth. To me this says the race organizer understands the importance of making space for women in the community.

So I lined up for each race and moved my legs as much as I could move them. Year over year I did see improvements on the courses that were the same. And I smashed my mid sickness efforts up the hill climb. But I certainly didn’t hit the pace or watts I was hitting in May. But I think that’s okay, because it’s not about where you place, it’s about whether or not you choose to show up and where your head is when you do.

I can honestly say I raced as hard as my body would let me that weekend and I’m looking forward to lining up healthy in 2018.

Thank you so much to Bow Cycle, Cyclemiesters, Bob Grunwald (Race Director), Robert Armstrong (Chief Commissar), every volunteer who stood on a corner to keep us safe, and all the friends, family, and Calgarians who yelled clapped and fed us. You all made this race one of the best experiences I have had all year (and I’ve stood on the national podium in 2017).